Stories of Old West Adventure with the Cartwright family and the Ponderosa Ranch. One of the longest running television shows ever! About the Cartwright family and the Ponderosa Ranch. This was one of the most loved westerns of all time. Originally airing from 1959 – 1973. Ben, Adam, Hoss, and Little Joe. Regular Cast – Lorne Greene, Michael Landon, Dan Blocker, Pernell Roberts, Victor Sen Yung, David Canary, Mitch Vogel, Ray Teal, Bing Russell, Tim Matheson.
Bonanza and The Ponderosa Ranch premiered on September 12, 1959, and the final episode broadcast on January 16, 1973. Bonanza’s initial season aired on Saturday evenings and placed at number 45 in the Nielsen ratings. During its second season the series moved up to number 17. Bonanza was moved to Sunday nights at 9:00 PM at the start of its third season. In that time slot the ratings soared and the series become second only to Wagon Train as the most popular program on American prime time television. Families stopped what they were doing to settle in and watch the Cartwrights. Bonanza remained in the top ten of the ratings until its twelfth season and ranked at number one in its sixth, seventh, and eighth seasons. Bonanza also became a worldwide success as it was broadcast in nearly 50 countries, including Canada, Brazil, Yugoslavia, the United Kingdom, France, Italy, Switzerland, Saudi Arabia, Thailand, Australia, and Japan.
Following Dan Blocker’s death in May 1972 after season thirteen ended, Greene, Landon, and Vogel continued the series into a fourteenth season, with Canary returning as Candy and Tim Matheson was introduced as ex-prisoner and newly hired ranch-hand Griff King. The program was moved to Tuesday nights where it slipped badly in the ratings to number 52 and was subsequently cancelled. Bonanza has, continued to be popular in syndication.

A Rose for Lotta

The Saga of Annie O’Toole 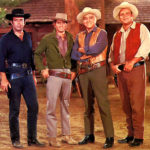 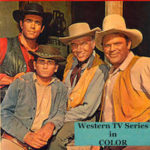 Blood on the Land

This website uses cookies and Google Analytics to improve your experience. We’ll assume you’re ok with this, but you can opt-out if you wish.

WesternsChannel.com is a branch of Westerns On The Web and is in no way affiliated with the Starz-Encore network.